On my home from work, I decided to stop at the Salvation Army in Independence, MO. I found a complete copy of Broadsides and Boarding Parties.  As I knelt and began check out the contents, a fellow thriftier "Mike" stood over me and waited for me to finish, asking if it was complete. I answered “yes” as he went down the isle looking at the remaining games and loudly sighing. After paying $1.98, he was waiting outside the store.  I quickly walked to my car as I wanted to check out the Fantasy Flight LOTR trivia game that I left behind. While I was online, I saw him drive away. My next stop was the DAV just down the road.

As I parked at the DAV, I noticed "Mike's" car. Upon entering the store, I went straight for the game isle and saw him in the men’s clothes section. I quickly spied a copy of Carrier Strike for $1.98.  As I picked it up, underneath was a copy of.... Dark Tower.

I grabbed both copies, stood up, and there was "Mike" my fellow thriftier (quickly becoming a CREEPER) standing next to me. As I made my way to the check out, he followed me explaining that he is a antique toy dealer and game collector. I asked him where his shop was & he said he travels from show to show 9 months of the year. I asked if he had a card, and he said he was “fresh out.” He introduced himself as “Mike.” I mentioned the Board Game Geek .com and he denied knowing about the site. Before I could even pay for both games, he offered to buy Dark Tower for $100 and told me how Carrier Strike was a “dud.” I politely said no thank you, and he followed me outside the store. As I walked away he yelled at me about how great some bicycle was. He asked me how old I was, as he was 40 something. I made a bee line for the car while calling my good friend Paul to tell him about the Dark Tower he was going to get. Mike made an additional offer of $200 as I was getting into my car.

Dark Tower was $2.98 and complete including the flags, buildings, tokens, figs, and tower that was nestled in it’s original packing material.  After getting in my car, I called Paul (on the left) to share with him the story.  He was stunned and was quick to think I was teasing him.  15 minutes later he was in possession of his long time grail.  The photo on the right is of me holding both finds! 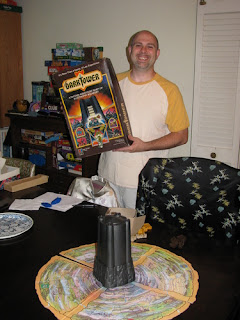 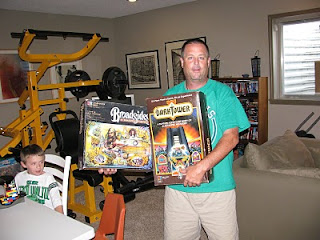 Please visit check you my fellow bloggers and their most EPIC finds.
James Abels
The Rebel
The Sexy Geek's House of Swag