Pirates of the Spanish Main (POSM); The game that walked the plank.

Why do some games die and vanish while other games just keep on keeping on? In the case of POSM, it was (in my honest opinion) a brilliant game that did a wonderful job of capturing the theme. However, from the beginning, it's fan base consistently complained that the producers (Wizkids) did not adequately support the game other than releasing product. Was this lack of support the plank that the game finally took?

POSM was introduced in 2004 as the world’s first constructible strategy game. It was then followed by 12 expansions that included Nemo-ish submarines, Chinese Junks, and Viking long boats. The game was sold in collectible pack that boasted a complete game in every pack including two ships, an island, treasure, a crew member, and a tiny six sided die. As each ship takes damage, you would remove a mast thus reducing the offensive capability. Even though the 12 expansions added unlimited depth, the game fell through the cracks as Topps sold Wizkids in 2008.

An interesting comparison (not by theme) is Netrunner by Wizards of the Coast. The game was published in 1996 and then vanished..... But not really. The game remained so popular that eventually Fantasy Flight games re-released Netrunner this past fall. The game lacked the product support, and retained a strong aftermarket value whereas POSM can e found for penny's on the dollar. While neither game is at all similar in play, it challenges the argument that POSM died because of lack of support.

By now you might be asking what is the definition of support given the 12 expansions. I suppose miniature player standards it would include story, plot, scenarios, and campaigns.....

Check out these links of toy and gaming blogs;

The Man Who Stares at Games
http://adambobomb.blogspot.com/?m=1 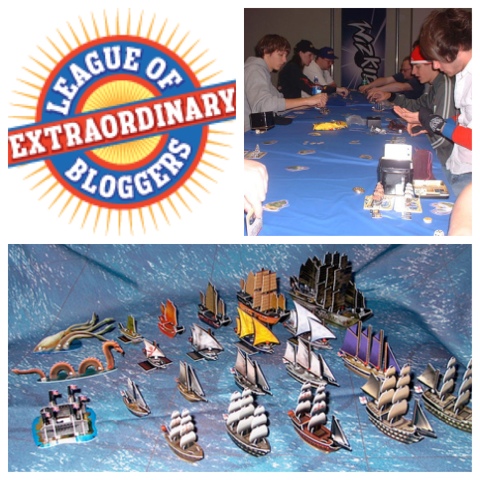 I'm a sucker for almost anything Star Wars. I immediately fell in love with the Star Wars Angry Bird toys that were released in the fourth quarter of 2012. While in Florida earlier this month to watch my oldest son run the Disney marathon, I stumbled across Darth Mash & Mashter Yoda. These wonderful toys are a cross over between Mr. Potato Head and Star Wars characters.

Who doesn't love Mr. Potato Head. The toy was invented and developed by George Lerner in 1949, and first manufactured and distributed by Hasbro in 1952. I have vague memories of attaching toy features to real potatoes. If your a fan of anything Mr. Potato then the Down Town Disney toy store would be nirvana for you. Aside from a large selection of Mr. Potato sets, you can build your own kit for $19.99. The only posted rule I could find was that the lid of the box "had to close." I guess if you wanted to, you could fill your box with only arms, and legs.

"May the Spud be with you!"

My blog - Achievements in Gaming; http://rgendres.blogspot.com/

Check out this link of toy & gaming blogs. 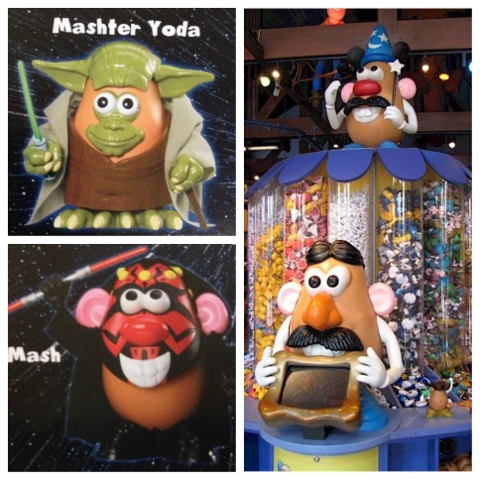 Posted by Grey Endres MSW at 11:32 AM No comments:

It's Good to be the King!

Did you ever play King of the Hill as a child? I remember playing it while on Boy Scout camp outs. Eventually it became the younger scouts versus a the older boys. "Take out their legs" was the most heard war cry. I even remember an indoor game or two with my cousins (on my mother's side) on their couch despises my aunt's taunts, King of the Couch.

Just before this past Christmas I found a very nice 1964 copy of King of the Hill by Schaper. The game is a simple "roll & move" game laced with traps. Imagine Shuts & Ladders without the ladders. In addition it does not use dice but a simple yet innovative "tilt-scorer." If your a fan of the Price is Right, the "tilt-scorer" resembles the plenko game.

Another new variant of the king of the hill theme is King of Tokyo. This games combines a dice mechanic, and a Godzilla theme. In the photo, Ian is playing the game designer, Richard Garfield at Gencon 2012. The goal is to knock out the other monsters using your claw attack or special sci-fy weapons.

"It's good to be the king" is a classic line in a Mel Brooks movie. Can you remember which movie? 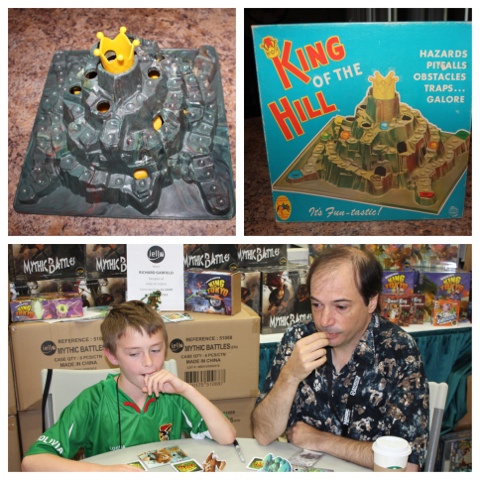 Posted by Grey Endres MSW at 9:52 PM No comments:

I love to make pit stops at flea markets and antique malls. While the prices are hit and miss (mostly miss,) reliving a childhood memory is priceless. I had completely forgot about this toy until I recently found one at a local antique mall. Having been born in 1963, space travel was a part of my childhood. I remember gathering around the television with my parents or during school at Somerset Elementary. I never grew tired of watching a liftoff or landing. Each one was special in their own way. Tragedies included. As a social worker, I have found ways to translate those lessons into my work with children and families. Take offs and landings are critical for mission success as well as healing hurt families. If I close my eyes a can remember my launches. 5, 4, 3, 2, 1...... Blast off. 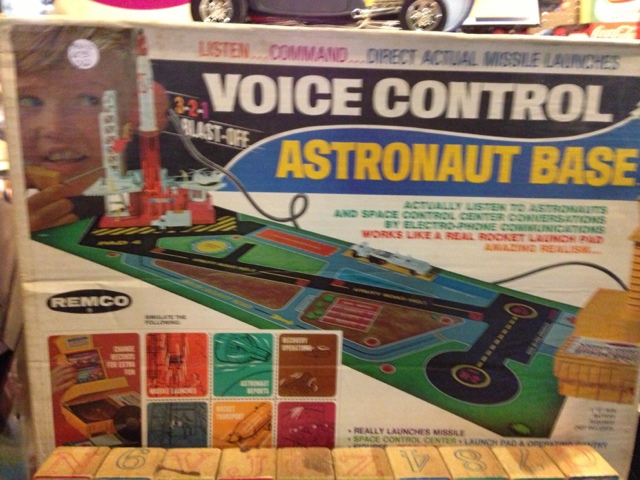 Posted by Grey Endres MSW at 4:58 PM No comments:

2012: A Great Year in Gaming But A Disappointing Year for Blogging

While I did a poor job of blogging this past year, gaming was wonderful. I played so many wonderful games. It's hard to decide which one was the best or my favorite. I recorded 302 plays that spanned 85 different games.  Aside from game play, I added many wonderful games to my collection including Merchants of Venus, Antiquity, Alien Frontiers, Castles of Burgundy,  Tzolkin and several hard to find Sackson games.

Speaking of Sackson games, my Sackson fan fest during Gencon was great fun.  I have already decided to host a third event.

My big game hunt continued to peak during 2012.  I found so many wonderful vintage games.  I completed my collection of Man From U.N.C.L.E. games that were produced in 1965 and 1966.  Plus I found a game from my childhood, Merry Milkman 1955.  As my collection continues to swell, I am considering cutting back the big game hunt, limiting my game purchases to 10 games, and culling my collection.  However my real resolve is to return to writing....  Time will tell. 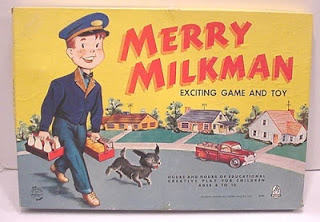 Posted by Grey Endres MSW at 8:52 PM No comments: