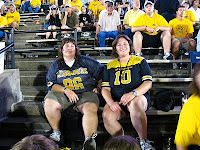 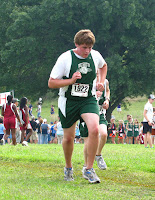 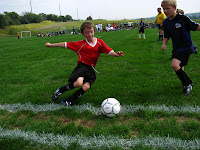 My achievements in gaming has been slim pickin's! Over the last two weeks, I have played 4th Ed. D&D with Ian, and A World Without End with the Pulp Fiction group. This past Saturday was a day of family activities and sports! What would MIZZOU football do without TJ Moe?? Project X has had a solid two weeks.

Posted by Grey Endres DSW MSW at 8:33 PM No comments:

The Return to Castle Ravenloft

I have always loved the Castle Ravenloft series / story line. I was excited to see the new Castle Ravenloft board game at GenCon, then disappointed. I was disappointed that the miniatures were unpainted, and it felt like a D&D re theme of Betrayal at House on the Hill. However, the gaming reviews began to filter in on several podcasts, and my interest grew. So far, I have enjoyed this game very much. I got in two plays this week including a 2 player & 5 player. Both games were tight. Ian loves the D&D theme, and this is a great entry level for D&D for him. Our goal is to play through each scenario this fall, before moving on a more RPG experience for him. Count Strahd and his evil minions will surely f 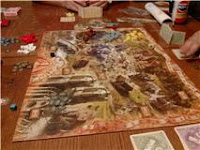 A big thanks goes out to John, who taught Kevin and I how to play "A World Without End" Saturday night. It is a hand management/resource production game that is based on the novel by Ken Follett. Kevin and I enjoyed it so much, that we got a second play in tonight. John shared with us that just when you think that you have figured out a winning formula, the game shifts. Ryan won easily tonight without building any houses in the Leper colony. He developed the medical technology, and cured several houses during the third and fourth chapters. During my first game, the winner came from behind, using the production from rent of his homes in the Leper colony. The game has four chapters, and each chapter has 6 rounds. The game has re-playability as each chapter has 11 cards that you select 6 to use. As the game ends, additional production of wood and stone provides 1 victory point each while coins = 1/2 point per coin. I made up some ground (15 points) at the end of the game, but only managed 4th place.

Tonight marks my 30th blog post. This week in gaming was very productive including acquiring Castle Ravenloft, learning a new game, and continuing Project X. Overall, this week was a 8+ in gaming.