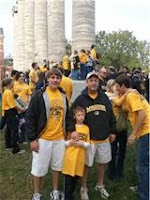 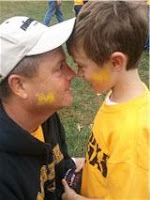 We had more fun than any one family should be allowed to have last weekend. Tammy took Hunter to tour the University of Missouri on Friday, and I joined them after work. It was the 99th Home Coming weekend at MIZZOU. The University boasts that home coming was invented at MIZZOU. We attended house decks Friday night along the greek row. The theme was board games. House decks are small skits that the greek house produce that focus on the up coming game that weekend. My favorite skit was the game Mouse Trap. As you can imagine, the mouse trap caught a Boomer Sooner mouse. On Saturday morning we attended the ESPN game day taping, and traditional home coming MIZZOU parade. The day ended with a fun tail gate dinner and a fantastic game that ended in a Missouri victory. As the game ended, thousands of fans stormed the field.

On Sunday we played Samarkand. It is a camel/desert trading game by Queen games. It is an easy game to learn, and the production is very good. The evening ended with a teaching game of Call of Cuthulu card game with Andy Dawson.
Posted by Grey Endres DSW MSW at 6:11 PM No comments:

The Fall is here, & it is time for Chili

It has been a great week in gaming. MIZZOU football crushed Texas A&M, Nebraska lost !!!, and MIZZOU plays #1 Oklahoma next Saturday on ESPN for home coming.
My wife and I played several more games of Scrabble on our phones via the Droid market. Overall, I am 5 & 3.
Ryan and Hunter had awesome runs at their League Cross Country meet this past Thursday. Congratulations to Ryan for making the 3rd League team, and for Hunter in posting a PR while smoking a runner from Eudora in the final leg of the race. As Mr. Erickson shared with you, "you stole his will." Desoto boys and girls took second place in the league.
Gaming night was a fun time this week. We played Sid Sackson's Buy Word, Z-Man's Magical Athlete, and a World Without End. In addition a fellow gamer brought a crock pot of Chili, and Amy brought a chocolate cake. Magical Athlete was a simple but very fun race game. The game begins with a draft of magical athletes for 5 races. I ended up with a Amazon, Assassin, Pirate, Priest, and Druid. Each athlete has a special ability that creates combinations during their race as other athletes might trigger their ability throughout the race. I lost the game by 1 point as Tara's thief stole a victory point from me at the beginning of the last race. I wish the game had a better production value. It screams to be tricked out. 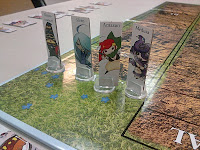 On a final note, Tammy and I celebrate our 22nd wedding anniversary on Friday the 22nd, and our oldest son turns 18 on Tuesday the 19th. Happy Birthday Ryan, I am so very proud of you. Happy anniversary Tammy. I love you very much. 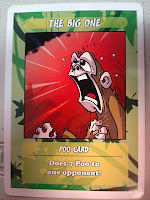 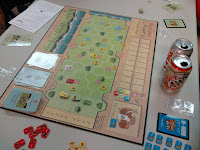 I did not want to like Poo. I have not purchased Poo, and have avoided playing Poo until last night. The game is simple, you are a monkey who is throwing poo at your fellow monkeys. If your hit with 15 Poo, you out. As you can imagine, it invokes a lot of gross humor???

Afterwards, we played Leaping Lemmings. It plays 2-6 scientists who have genetically engineered Lemmings who want to jump of the cliff for points. Dawson shared that it felt more like a game of collecting food pellets. I have to agree with him. on a scale of 1-10, it is a four. However the theme and production is very good.

Tammy and I are 2 & 2 in Droid Scrabble. I have yet to best her record setting 121 point play. I did pull out a classic Sid Sackson game while tailgating at the Missouri vs. Colorado game this past Saturday, Buy Word. It is a very fun simple word spelling game. The goal is to have the most money at the end of the game. After drawing tiles 2-5 tiles, you pick which ones you want and pay the amount of pips squared. For example, if the letter tile is an "E" that has one pip, you pay 1 squared = $1 to the bank. Then after everyone has paid for their tiles, you sell you word for the total pips squared. So if you bought 1 tile in three rounds for $1 each, and to spell the word CAT. You could sell the word for 3 pips squared for $9. Making a profit of $6. More challenging letters have more pips such as the Z, Q, or X. After spelling your word, the letters go in the box. There are several variants such as drafting tiles, trading, or auctioning as well as playing them on the table in a crossword format. It is a very fun game, that may get lots of plays this winter.

Project X had a slow but steady week.
Posted by Grey Endres DSW MSW at 6:52 AM No comments:

Tammy and I have been playing Scrabble over the droid platform this past week. Today, she played "quest" with a triple "q" score and double word score for 121 points. I was then behind by 200 points. Ouch! Tonight we played Acquire, and The World without End. I won the World by 1 point, but came in 4th place in Acquire. Paul played a great game tonight even though he went last and did not manage to make a early merger for that bonus stock option.

Over the last two weeks, I did manage to find two more Sid Sackson titles including Buy Word and Bazaar. However, I am really looking forward to I'm the Boss coming soon from Face 2 Face games.
Posted by Grey Endres DSW MSW at 9:37 PM No comments: