Baltimore was a blast

Aside from attending my God son's high school graduation, I got to thrift (hunt) for games. My best find was a copy of Bootleggers for $1. I played 8 games of Magic the Gathering with my buddy Rob, and we went 4 & 4. We some how have a knack of playing similar decks against each other. Tongith, I stayed home, and played games with the family including a Tier auf Tier & Jurassic Park III Escape from the island. Overall this was another good week of gaming. I found good games, played good games, and made 3 game trades. Over the course of the next week, I will get Domination, Ploy, Business Decision, and KING OIL in the mail. On a scale of 1-10 (10 is good,) this weeks achievements in gaming was an 8.66 !! Bonus .66 for finding games in Baltimore via my Google phone 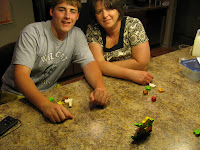 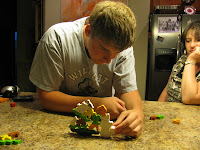 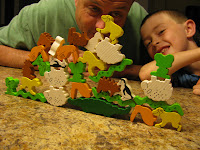 Posted by Grey Endres DSW MSW at 8:07 PM No comments: 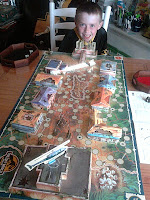 Today was the last day of school for Ryan (17,) Hunter (16,) and Ian (8.) So I picked Ian up early today so that we could thrift for games, buy an end of the school year gift, and play a board game at home. Ian picked out Apples to Apples Jr. for his gift. While thrifting, we found 2 3M games; Stocks & Bonds & Facts in Five. Upon getting home, we played two games of The Lost World Jurassic Park game. Ian managed to get three humans to the chopper and win while my dinos ate 9 humans! Playing with Ian while he giggled - PRICELESS. After dinner tonight we played two 4 player games of Apples to Apples.
Posted by Grey Endres DSW MSW at 5:39 PM No comments:

This Week in Gaming 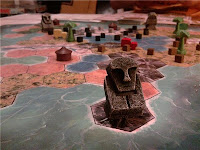 This week in gaming got off to a slow start, but ended with a bang. Given my son Hunter's Eagle Scout ceremony, I did not think that this week would offer much in the way of gaming. Thrifting was pretty thin. I 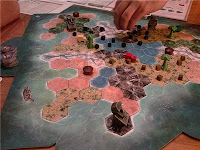 did pick up the 1989 & 2004 copies of Trump. Buying & Selling in order to rule the world! I did manage to make a wonderful trade for a beautiful copy of Feudal, a 1960's copy 3M book case game. Game night was Saturday at my home. We played Boarderlands, Aquire, Tobago, and Jaipur. Boarderlands is a cross between Small World, Diplomacy, and Settlers of Catan. It is considered by some to be the grandfather of Settlers. Paul won hands down while Ian (8 yr old) made a strong showing. Ian had two territories that produced gold.
Aquire was victory #3 in 5 games. I made more than 60,000 dollars, and most every merger was on my terms. Tabago is a beautiful game with wonderful bits and board art. Overall, the week was a 6 on a scale of 1-10, where 10 is the best.
Posted by Grey Endres DSW MSW at 9:25 PM No comments:

Week three of thrifting was a solid week for me. A few weeks ago, I purchased a game from a local Ebay dealer, and I gave him my contact information in case he found any interesting games. T 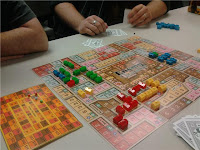 o my surprise, he contacted me this week, and I had a private showing. He had some 40 games for me to look at. I ended up getting 10 games including Masterpiece, Skirmish, Titanic the board game, Summit, and Goosebumps. In addition, I found another 3M title. The quest continues.... We played 5 games this Sunday at game night including Executive Decision. A 3M title of buying and selling goods. After miscalculating early on, I did manage to finish the ga 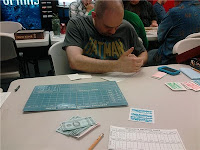 me with more $$ than I began with. Paul had read the rules and was off to a huge start, but Pat played a gamble on the 6th turn, 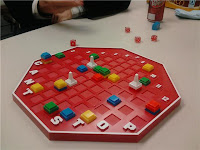 and won by more than $100. We played Enemy Chocolatier, that I decked out with Monopoly Jr. hotels. While I thought my stratey was sound, Andy ran away with the game by completing his candy recipe. The final game was a Can't Stop. It is a Sid Sackson game from 1980. I tied for first or came in second!!!!! Over all a good week in gaming. I am blessed with good friend and good times. By the way, it was decided that we are going to Gencon Tuesday evening for the special Wed. program & a early pass on Thursday. On a scale of 1-10, it was another 7.5!
Posted by Grey Endres DSW MSW at 6:28 PM No comments:

Acquire; 3 weeks in a row 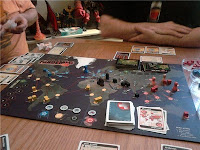 This week in gaming has ended on a very fun note. Pat, Paul, Tim, and Kevin, met at my house Sunday night for a gaming session. We played Pandemic. It is a cooperative game where you work together to prevent an epidemic/outbreak across the globe. We lost by running out of destination cards, but had turned in 4/5 cures. So close.............. Afterwards, we played a third game of Acquire (3 in 3 weeks!) We played my 1968 copy that Paul traded to me. It was missing a blue hotel piece, but I hope to have found one via a game part trade on Board Game Geek. I came in 4th place out of 5. My game suffered from pulling the wrong tiles. This week I painted Monopoly hotels to match the 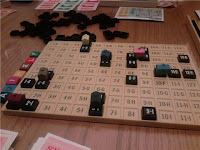 hotel merger tiles; pink, red, light blue, royal blue, green, brown, and yellow. It was a fun project that ended in me clean/sorting/ & arranging my painting/hobby supplies. While thrifting this week, I found copies of 3m classic; Jumpin and other misc. titles. A fun week of hunts for games, but no holy grails. I finished the most recent episode of the Dice Tower, and have some thoughts about making my own copy of Tactics; with 1 inch discs. Overall, the week was 7.5 out of 10 for gaming. Achievment Unlocked!
Posted by Grey Endres DSW MSW at 10:16 PM No comments:

The Week that was Acquire 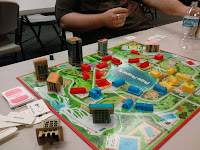 Week 2 of Thrifting was awesome. I acquired Prize Property, Buffy, Dark World, the Ebay game, Axis & Allies, Monopoly the City, and Acquire. Paul (lucky) Roberts found 3 copies of Acquire in three days. We played a three player Acquire tonight, and I won with $41,600. Had Pat been a little more aggressive with some of his stocks, he would have won huge. In addition, we played Prize Property. It is a push your luck game, with an equalizing factor, the Lawsuit/gavel. Paul won this, but lost 6o Million in buildings before getting the win. Overall, it is a beautiful game. I got this game via Ebay for $7.99. I think that the new Monopoly City may be a remake of this game. I finished the latest Dice Tower, the topic was remakes. Does Agricola really remake Puerto Rico? The week in gaming was a 8 plus!!

Posted by Grey Endres DSW MSW at 9:38 PM No comments: