This week’s League of the Extraordinary Bloggers topic made me smile.  A simple search on Board Game Geek revels 72 games with the word “Robot” in the title!
Most likely you have heard of the very popular card game, Magic the Gathering.  What might be unknown to you is Robo Rally.  How are these games related?  Aside from both of them having been designed by Dr. Richard Garfield, Robo Rally would not have existed if MtG wasn’t published and hadn’t exploded into such a popular game.
In 1993 Peter Adkison (fromer CEO of Wizards of the Coast, and now the owner of Gencon) met with Garfield to discuss Garfield's new game RoboRally.  Adkison liked the game but decided that Wizards of the Coast lacked the capital to produce it.  Adkison was looking for a portable game that could be played in the downtime that frequently occurs at gaming conventions. Dr. Garfield then presented the general outline of the concept of a Trading Card Game and MtG was born in 1993.
Robo Rally was then produced in 1994, and saw a second printing by Avalon Hill 2005.  The Board Game Geek description of Robo Rally is “Imagine that you're a supercomputer. Now imagine that you're bored. So you dream up a little contest for you and a couple of your supercomputing buddies. Your task is to move one of the stupid little robots out on the factory floor through a series of checkpoints scattered throughout the factory. The wrinkle, however, is that the factory floor is filled with all kinds of inconvenient (if not down-right deadly) obstacles located in various locations: conveyor belts, crushers, flame-throwers, pushers, teleporters, oil slicks, pits, et cetera. But the real fun comes when the robots cross each other's path, and suddenly your perfect route is something less than that...” 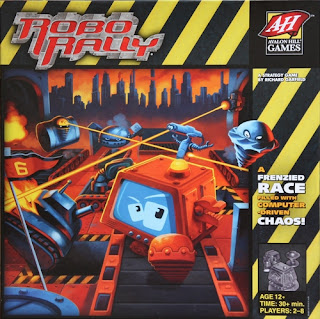 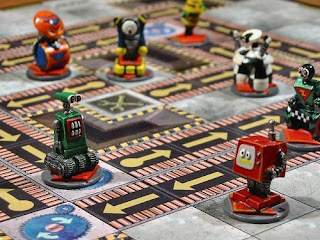 Robo Rally is crazy, unpredictable, and completely random fun.  If you can find a copy, give it a run.
Please check out some of my fellow bloggers entries about Robots in Pop Culture.
Pop Rewind
Calvin's Canadian Cave of Cool
Erik Johnson Illustrator

After a short hiatus, I have really enjoyed catching up on so many of my fellow bloggers posts.  However, I wouldn't trade the last 6 weeks as I joined my youngest son at his first Boy Scout camp session, took the boys at the Gillis Center to Rotary camp (I taught Archery for five days), and served as Camp Director for Cub Scout Day Camp in Kansas City last week!  In between, we took a short but fun trip to Sioux City & Sioux Falls with a quick layover at the Omaha Zoo!
I hope you are having a great summer!
Grey
Posted by Grey Endres DSW MSW at 6:49 PM 1 comment: