You Can Never Have Enough Legos 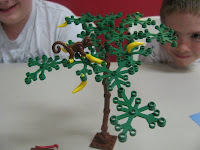 "You can never have enough Legos" has been a common phrase in my home as my wife Tammy and I have three sons. "Really?" was often Tammy's reply. The thought of Lego board games is so cool, it's hard not to find a way to acquire them all. I reserve a special place in my heart for Legos. It was by far my favorite toy (ahead of GI Joes & Matchbox cars) as a young boy.

I had the opportunity to play two simple Lego games this weekend including Banana Balance and Shave A Sheep. While very simple games, they are both just very visually appealing (quoting the Spiel podcast, "truck loads of goober.") When you join a lego game, and know up front that it is a very lite filler targeting the Lego crowd (you know who you are) there is a lot of smiles in those small boxes.

Once you build the dice, the banana tree, and the sheep, set up is minimal. Minus the four starting palm leaves, you only need to build the tree once as it fits nicely back into the box. The game begins with four palm leaves on the tree, and a small pile of Lego bananas. The goal is to have the most bananas at the end of the game. After you roll the dice, there are three possible moves to make, add a palm leaf, add a banana, or put the monkey in the tree and take a banana. Once you have added all of the leaves and bananas, you take a monkey move. The game ends when either all of the bananas have been taken or the tree falls over. If the monkey falls out of the tree, you put one of your bananas back into the supply to be "re-treed." It plays very quick, and the pieces are cool to play with.

The goal of Shave A Sheep is for your sheep to grow and shear wool while avoiding the wolf. Wolves and sheep don't mix! If your sheep ever grows five cubes of wool, it automatically shears. Who ever has the most wool wins, and the game ends when you run out of wool. Again, its a very simple game, but the sheep are just cool. Minus the very random mechanics and that they lack any strategic & tactical depth, I just had simple fun including watching the boys laugh while exchanging table talk.

I have my eyes on Lego's Oriental Bazaar but it is not carried in any local stores. I am also interested in the upcoming (2011) Lego Heroica series which is an expandable dungeon crawl. In addition, Lego has created a co-operative game entitled Ninjago (2011.). Given their popularity, I guess a Lego deck building game is next. Secretly, I would love a meatier more gamer’s Lego game, but know that’s not going to happen. Why? Because Legos target children, not 40 year old board game fanatics. The truth is that Lego is no 3M. If you have not read Americanopoly by Bruce Whitehill, he summarizes 3M’s desire to create board games for adults. “The wrapping paper and ribbon division was looking for a way to expand revenues when employees chose the idea of a game line, aimed at providing mental diversions for upper middle-class buyers. Two up-and-coming American inventors, Sid Sackson and Alex Randolph, were enlisted in 1962 to create a games unit, and the “bookshelf” box was born. (http://thebiggamehunter.com/company-histories/3m/) But how sweet that would be!
Posted by Grey Endres MSW at 7:24 PM No comments: