Board Games Are Works of Art

While catching up on several Dice Tower podcast episodes, I was fairly surprised when I heard the host, Tom Vasel, state that he did not think that board games were an art form. I was so surprised that I had to go back and hear his comment again just to make sure I didn't misunderstand what he was trying to say. His thoughts on this can be heard in episode 197 around the 33 minute mark.

Professionally I am a social worker, and completely understand & respect different points of view. However I am very willing to take a stand when I hear something I totally don' t agree with. I am probably more sensitive to this issue than most others given my mother was an artist for Hallmark Cards and my father was an interior designer. In addition, given our country's economical struggles, the arts are often the first programs to be cut. Just recently the Kansas Governor eliminated an arts council to trim the state budget short fall. I could go on & on about the benefits of the arts as compared to the danger of eliminating them but I won't (although it's tempting.)

As an avid gamer and voracious reader, the graphics bring to life that game or book for me. I could not tell you how many times while reading the Dragon Lance series, I stared the various covers, trying to imagine what you would be like to meet Tanis the half elf. During the fall in 2009 I was a guest lecturer at an honors art class at Desoto High school. The students shared with me that they often dream of seeing a piece of theirs hanging in a gallery or museum. I asked them how they would feeling seeing their work on the cover of a book, in a game board, on a playing card, or in the pages of a comic? Having visited with Franz Vohwinkel several times at past Gencons, each assignment he gets whether it's a MTG card or game board, he is challenged to give life to that designers game.

Is there any doubt that a beautiful board bridges the gap between a game mechanic and the game's theme. Two boards from 2010 that I think were nicely done were Chaos in the Old World,Fresco & Tobago in 2009.

Aside from the physical game itself, the game design can also be an artistic expression. Many fans of the arts can identify a particular artist given their use of colors or brush strokes, (Barry Windsor-Smith comes to my mind - Conan, Archer & Armstrong,) just as many gamers can identify a Reiner Knizia game given his use of game mechanics. Sid Sackson writes in his book "Beyond Tic Tac Toe" (1975,) "games mean many thing to many people; to me they are an art form of great potential beauty. Just as a composer's creation is brought to life by the performing musicians, a game inventor's creation is brought to life by the players of the game. When the creation is inspired and the players are talented, a true work of art results."

Have you seen the newest came by Flying Frog Productions, Conquest of Planet Earth: The Space Alien Game? While pre-ordering it at Gencon I could immediately see their attempt to capture the campy feel of the "War of the Worlds." I can almost hear Orson Welles narrating game play. The art and layout are wonderful. I tip my cap to the Flying Frog team. While it's still early in 2011, it is leading the way for most artistic game. While beauty is in the eye of the beholder (an English 18th century proverb) "art attracts us only by what it reveals of our most secret self." Jean-Luc Godard
Posted by Grey Endres MSW at 7:32 PM No comments:

Soon I will be on Holiday in Shanghai

It has been a wonderful week of gaming achievements. I got caught up with The Dice Tower podcast and played 5 different games this week. Including 5 games of Hive and a second play of Yomi.

I recently acquired Shanghai as it has been on my wish list for the greater part of 2010. I have purchased and played Chinese themed games this year in preparation for my trip to China this coming March. It was designed by Sid Sackson and published by Ravensburger in 1997. It is a re-implements Maloney's Inheritance that was also publish by Ravensburger in 1988. Maloney’s Inheritance was a re-implementation of Holiday. Holiday was publish in 1973 by Research Games Inc. The box cover declares that it a “glorious game of world travel.” Holiday plays 2-8 while Shanghai plays 2-6. Holiday is a very rare gem that is a “grail” for many Sid Sackson fans. Cash is very tight in both Holiday and Shangai while not so in Maloney’s Inheritance. Shanghai differs from Holiday as it contains a random event deck. In addition, Shanghai’s theme is Chinese in nature while Holiday is more about traveling around the world. Shanghai won the Vuoden Perhepeli which is the Finnish Game of the Year in 1997.

Shanghai is the largest (population) city in China. The city is located in eastern China, and sits at the mouth of the Yangtze river. Players bid for the right to chose which of three locations that Lang-Tsu will travel too thus enabling the player to bribe him for information. The game turns are played during the course of a day, and kept track by a clock with Chinese symbols. The goal is to overtake the Junk that is moving throughout the harbor. Each round begin with an auction. A key mechanic is that even if you loose the auction, but have cards that match Lang-Tsu’s location, you can gain free information (victory points.) Thus this game can be very interactive. Loosing doesn’t mean you can’t make a gain.

Shanghai's production is beautiful. However Holiday rates better. After playing both games back to back, I agree that Holiday should rate better. While both games have a wide open bidding/auction mechanic, Shanghai has a very random element that detracts from the game. Who ever wins the auction either takes of choose another player to take a event card. The effects are either positive or negative, and the negative can be REALLY negative. During our game this evening, Andy won a heated auction, played two location cards, had the points double, but all in vain as the event card deleted the points he had earned. Ouch!!! I could see it on Andy's face, his enjoyment thus far evaporated just as quick as the points he had just lost.

Are you a fan of or newcomer to Sid Sackson board games; Acquire, Focus, Can't Stop, Holiday/Shanghai, Buy Word, & I'm The Boss? If so, please join me in celebrating these wonderful games as I will be hosting an event at GenCon. Multiple copies of these games will be available for play. Rules will be taught if your a new comer. Prizes/swag for all participants. Game ID: BGM1119613
Posted by Grey Endres MSW at 10:33 PM No comments:

A Cryokentic Reanimate & A Precise Watchmaker

Before I delve into this weeks achievements in gaming, I want to congratulate my son Ryan and the Desoto Scholar's Bowl team for winning the 4A Kansas state championship this past Saturday. Their team was just awesome this year as they completed the trifecta winning league, regionals, and state.

It was an outstanding week in gaming. I got in two games each of Acquire and Settlers of Catan during the week. In addition, I found a copy of a 1999 Avalon Hill Acquire on eBay. This edition includes detailed plastic miniatures.

On Saturday I was interviewed by Under-discussion the Under-gopher podcast about my book project on Sid Sackson. While actors have the voice and face, and radio personalities have the voice, I have neither. However it was fun to share what I have learned about Sid. Speaking of Sid, I acquired two new Sackson titles this week including Shanghai and Doorways to Adventure. I found Doorways at a local thrift shop for .75 cents. Shanghai is a remake of "Holiday."

I took my 9 year old to game night at Pulp Fiction tonight. We played Gamma World. Gamma World is a RPG that feels like a board game. The game master was Brady, and he was so patient with Ian (who never stopped talking.) My character was Fred Randall a cryokentic reanimate. However my favorite character was Carl who was part great ape and tyrannosaur rex who used a stop sign as a melee weapon! Major kudos to Brady as well as Andy and Eric. Ian had a wonderful time (he talked all the way home about wanting to play again next weekend.)

Afterwards, I played a first game of Yomi. Yomi is a new card game that has a paper, rock, scissors mechanic. I first heard about this game on the Dice Tower podcast. After a first play, I want to review the rulebook and FAQ before getting in another game. I played Max Geiger a precise watchmaker deck. The game offers great potential. Overall this week was a 8 out of 10!
Posted by Grey Endres MSW at 9:07 PM No comments:

The Settlers of Catan

Go Packers! We had a nice day today including chicken chili, a few friends, and Settlers of Catan. 10/Ten games later... I did manage to get to Pulp Fiction last Sunday, and we played Conquest of Earth. It is a new game from Flying Frog productions. I purchased it at Gencon but it only just arrived. The game can be played either competitively or cooperatively. Overall, it was easy to learn, and our first game was very close. The game components are wonderful, but hard to photograph as every card has a glossy finish. 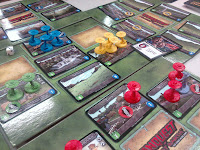 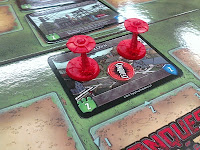 I have multiple trades in process including another copy of Can’t Stop, Executive Decision, and my first copy of Shanghai. In addition, I purchased a DVD set of all of the Avalon Hill General magazine issues.

I found a copy of Kellar’s Keep on Friday, and the box felt unusually heavy. Upon opening it, aside from being complete, it included all of the figures, doors, cards, and furniture from the base game; Hero Quest. Bonus.
Posted by Grey Endres MSW at 9:26 PM No comments: