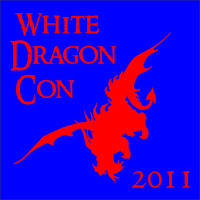 I can't believe that it is one week until the seventh White Dragon Con. It's hard to believe that this will be the seventh gathering! White Dragon began as a game day that celebrated Pat Robert's and my birthday. Maybe it just an excuse to take a day off and play board games with friends and family. Either way, its a wonderful day.

I am planning to teach a game of Sid Meier's Civilization by Fantasy Flight games as well as play some of my classic favorites such as El Grande, Amun-Re, Acquire, and Crokinole! In addition, I'm sure new favorites will hit the table as well including Quarriors, Dominion, and Eminent Domain. During last years White Dragon, I found out that two of my gaming friends had been hired as artists for Eminent Domain, Eric Carter & Ryan Johnson. Both artisits are wonderful guys. It is exciting to see their work come to life on the gaming table.

Gaming has been a little slower than past months, but has remained steady. Over the last two weeks I have played 10 Days across the Americas & Asia, and Ticket to Ride with the family. At Pulp Fiction game nights, we have played Power Grid Factory Manager, Tigris & Euphrates, Alhambra, and Tower of Babel.

I have continued to find interesting games while visiting local thrift stores. Some of these finds have translated into trades which include several vinatage games. Before the year is over, I will blog on some of these finds.

Peace Be With You and Your Family this Holiday Season!
Posted by Grey Endres DSW MSW at 6:15 AM No comments: