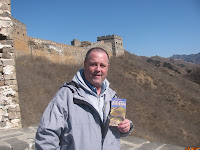 During my recent trip to China, I hiked my copy of the Great Wall up to the Great Wall. While there, I played a two person game. While we were playing, a spirited card game was occurring among some local teenagers. They offered me a seat, but after watching several hands, I could not figure out what they were playing. Although when they played a card, they would slap it down passionately. We hiked the Jinshanling Pass which is about 93 miles north of Beijing. This section of the Great Wall is less traveled/visited by tourists. 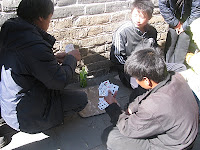 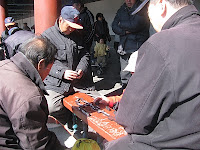 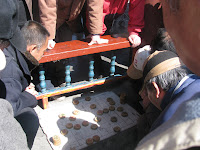 Throughout our trip, I saw many kinds of games being played as well as being sold. After visiting the Temple of Heaven in Beijing, I saw Mahjong, Dominoes, and Chinese Chess being played. While shopping in the market that surrounds the Yu Garden in Shanghai, I saw various card games being played by the local merchants.

I was surprised to find so many games for sale. The costs were much less than my friendly local game store. Before haggling, Stone Age cost 128 Yuan which is about $22. It was hard to say if they were real or counterfeit copies. As a Sid Sackson fan, I was tickled to find a Chinese copy of I’m the Boss for sale in a store in Shanghai. In that same store, I saw a card game called Blitzkrieg Death Front. It did not include English rules, and it is not in the BGG data base so I passed. I can’t believe I did not at least take a picture of it. I did however find a link to it via Swan Panasian games; http://www.boardgamer.org/product_info.php?cPath=364&products_id=3811

In addition to playing the Great Wall, I also played a game of Hive at the Wall. We were able to camp along the Wall, and I was hoping to facilitate a game of Werewolf, but it gets very dark on the Wall after the sun goes down. What an awesome setting that would have been.

During the plane trip to and from China, my son and I played Mate which is a simple card game out of Sid Sackson's Gamut of Games. Sid considered it a pure information game.
Posted by Grey Endres MSW at 8:01 AM