"Hi my name is Grey, and I have a guilty pleasure."

As the board game hobby has exploded over the past dozen years, it has created a gamer know as the "game snob." The game snob looks down on those who play games that are beneath them. Games that are random, games that have dice, games that are collectible, games that don’t come in a box & have "pretty" wooden bits...... Magic the Gathering is one such game. Game snobs don't play MtG or would ever admit to having played it. I love to play Magic the Gathering. Yes that’s correct, I LOVE TO PLAY MAGIC THE GATHERING, and I am proud to say so.

I no longer buy MtG cards nor keep up with the rules, banned cards, restricted cards, general news, and FAQs. I began playing MtG around the end of Unlimited through Fourth Edition. Instead, I have maintained about a dozen decks that I pull out a couple times of year. My decks aren't tournament decks but fun decks such as my white/green flying elephant deck, my 5 color Slivers deck, or my mono green elf deck that includes an Inquest cut out green/red Santa Claus King of the Elves card.

I have some amazing early cards including two sets of the power nine. Maybe I'm just foolish but yes, I play them.

I was always attracted by the storyline, game mechanics, and art. Having met some of the artists has been a real thrill. I love to play Magic the Gathering! I also love grilled cheese sandwiches and tomato soup! 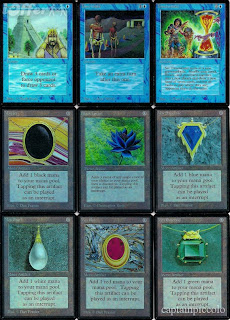 Please check out some other guilty pleasures.
Flashlights Are Something to Eat
Pop Rewind
Goodwill Hunting 4 Geeks

Posted by Grey Endres DSW MSW at 8:24 AM