When I was a kid, my favorite activity was riding my bike.  Although I logged hours and hours playing with my GI Joe's, Lego, Cars, and Army Men, my bike were my prize possession.  My first bike was a red Schwinn Stingray with a white banana seat.  If it was nice outside, I was on my bike.  It unlocked my imagination.

I lived on a dead end street, that had two islands.  When I was riding my bike around the islands I could imagine being in the Indy 500, or was in chase like the classic 1970's movie, the "7Ups."  I decked out my bike by adding a horn, an AM radio, and eventually a basket in the front (yeah I was that kid.) 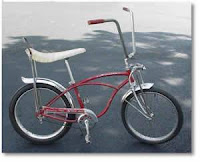 Then the big day arrived when my parents let me ride my bike to school!  I can remember it like it was yesterday.  Complete freedom with the wind in my face.  By 5th grade, I was allowed to ride my bike to Bruce Smith Drugs where a pocket full of allowance would be spent on Wacky Pack stickers or the latest 45'.  By 6th grade, I was riding my bike to school everyday including days that I had band.  I would just strap my Saxophone in the basket, and off I went.  It was my mean red machine.  A 1972 Red Schwinn Stingray!

Then 1976 rolled in, and my birthday gift was a Columbia Light Blue 10 speed.  Blue Ice!!  It was such a smooth ride.  Within weeks I could ride without my hands.  Using a helmet never crossed my mind.  Then in the Spring of 1978 as I was riding to church to serve mass (every good Catholic boy was an Alter Boy,) I was hit by a women who was turning left and did not see me flying down Mission Road.  As my bike went under her car, I went onto the hood.  As she hit the brakes, I went flying.  Hitting the ground was worse than being hit by the car.  I turned down a ride by the women, and walked my bike to church, served mass, and then got a ride home by my fellow Alter Boy's mom.  My parents were in shock as I explained how I hit a pot hole.  I was so afraid that I would not be allowed to ride my bike, as a neighbor boy was hit by a car and his parents grounded him to his yard for a year. I did not tell my father the truth until I was well out of college.  While my bike was eventually repaired, but the frame was just off enough that I could never ride without my hands again.