I Play the Color Red

This weeks League assignment has me "seeing red," or in gaming terms "playing red." Are you up for the challenge? Can your inner gamer go strong? Well if you are, how many game tokens can you identify? These tokens represent 40 different games. Some games have more than one token. Trickery indeed!

When you ask most gamers to think of the most influential "red" game.......? There is only one possible answer, Dungeon & Dragons Red Box.  The Red Box was first released in 1981, and then re-released in 2010. Wizards of the Coast will release Original Dungeons & Dragons RPG, a "Premium Reprint" of the very first D&D releases later this year. The white box was originally released in 1974. 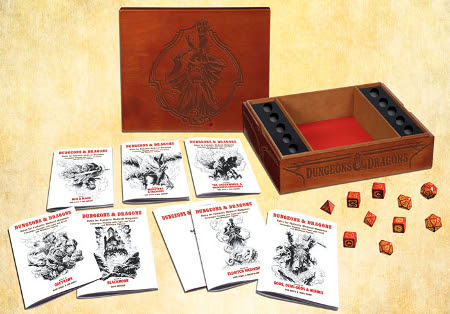 Go check out what other League members are "seeing red."
That Figures ''A Review Retrospective in Red.''
Nemesis Complex Defines the Red Skull
Branded In The 80's  I hope that blood does not make you squeamish!